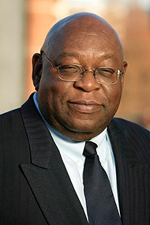 Before serving as dean, Bernstine was the first graduate of the William H. Hastie Fellowship Program at UW Law, where he received his LL.M. in 1975.

After leaving his post as dean of UW Law, Bernstine served as president of Portland State University in Portland, Oregon, for ten years. At the time of his death, Bernstine was the president of the Law School Admission Council (LSAC), which administers the Law School Admission Test, along with a wide array of admissions services for law school applicants.

Bernstine was UW Law School’s twelfth dean, and its first African American dean. During his tenure here, he was highly regarded for his administrative talents, his dedication to students, and his success at recruiting top-notch faculty.

According to Dean Margaret Raymond, “Dean Bernstine’s leadership made a powerful mark on this law school, and the warmth and affection with which he is regarded among our alumni and colleagues continues to this day. He will be profoundly missed here.”

This article appears in the categories: Articles