Vanita Gupta, president and CEO of The Leadership Conference on Civil and Human Rights 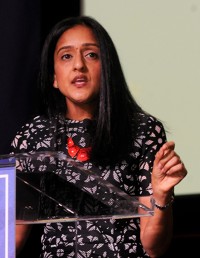 Vanita Gupta is president and CEO of The Leadership Conference on Civil and Human Rights, the nation’s oldest and largest civil rights coalition charged by its diverse membership of more than 200 national organizations to promote and protect the civil and human rights of all persons in the United States. Before joining The Leadership Conference in June 2017, Gupta served as Acting Assistant Attorney General and head of the U.S. Department of Justice’s Civil Rights Division. Appointed in October 2014 by President Barack Obama as the chief civil rights prosecutor for the United States, Gupta oversaw a wide range of criminal and civil enforcement efforts to ensure equal justice and protect equal opportunity for all during one of the most consequential periods for the division. Under Gupta’s leadership, the division did critical work in a number of areas, including advancing constitutional policing and criminal justice reform; prosecuting hate crimes and human trafficking; promoting disability rights; protecting the rights of LGBTQ individuals; ensuring voting rights for all; and combating discrimination in education, housing, employment, lending, and religious exercise.

Prior to joining the Justice Department, Gupta served as Deputy Legal Director and the Director of the Center for Justice at the American Civil Liberties Union, where she launched the Smart Justice Campaign to end mass incarceration. She joined the ACLU in 2006 as a staff attorney. Gupta began her legal career at the NAACP Legal Defense and Education Fund, where she litigated a series of landmark wrongful drug conviction cases in Tulia, Texas. Gupta graduated magna cum laude from Yale University and received her law degree from New York University School of Law, where later she taught a civil rights litigation clinic for several years. This lecture is supported by the fund established to honor Robert W. Kastenmeier, an outstanding graduate of University of Wisconsin Law School, who served with great distinction in the United States Congress from 1958 to 1990. During his tenure, Congressman Kastenmeier made special contributions to the improvement of the judiciary and to the field of intellectual property law. He drafted the rules for the House Committee on the Judiciary that were used for the impeachment of President Richard M. Nixon, as well as the articles of impeachment against Judge Harry Claiborne. In 1985, Congressman Kastenmeier received the Warren E. Burger Award, presented by the Institute for Court Management, and the Service Award of the National Center for State Courts. In 1988, American Judicature Society honored him with its Justice Award for his contributions to improving the administration of justice.

The Kastenmeier Fund was created to recognize these contributions by fostering important legal scholarship in the fields of intellectual property, corrections, administration of justice, and civil liberties. It is a fitting tribute to the leadership of Robert W. Kastenmeier in these areas.