Chicagoan Alex Knorr is the latest University of Wisconsin Law School student to be named a Stearns-Shaw Scholar.

Knorr, who earned a bachelor’s degree in economics at American University in Washington, D.C., received the award for her commitment to defending the rights of lesbian, gay, bisexual and transgendered people. At the UW, she is working on a dual degree in law and public policy.

The scholarship was endowed by 1992 UW Law graduate Denis Stearns and his husband Thomas Shaw to encourage champions of the LGBTQ community to choose UW as the best place to study law and make a difference. They endowed two additional UW Law student awards, one of which also honors the memory of Stearns’s mother, Julie Stearns.

"Saying that we wanted to pay it forward is a bit cliché, but that is exactly what we wanted to do,” Stearns says. “Our intent is to support the creation of lawyer-leaders who will continue advocacy for positive change in the world, especially for the LGBTQ community that faces so many challenges and outright attacks."

Knorr recently spoke with UW Law School about her plans for law school and beyond. 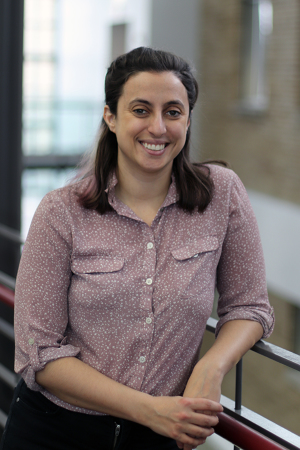 Why did you decide to pursue a law degree?
“After six years of living in D.C., I took a job at a housing nonprofit back in Chicago, where I worked with communities affected by a segregation practice known as redlining. That’s when I had this epiphany about how navigating that organization’s world — knowing how to interact with the mayor’s office, for example, or the IRS or any number of government agencies — really requires you to understand the language of law. Nobody there had that ability, which put us at a clear disadvantage. So, I thought, ‘Okay, law school it is.’”

How did you decide to attend UW Law School?
“First, when I was evaluating geographic areas, coming to UW Law allowed me to stay close to the communities I care about. For most of my life, I’ve depended on the LGBTQ community to help me navigate different struggles. I always thought, ‘If I can just find out where the gay people are, I’m going to be okay.’ Madison is both near my hometown, and it has a thriving LGBTQ community.

“Second, I knew I wanted to work toward a dual degree in law and public policy, because I am convinced that law needs to be grounded in evidence-based practices if it’s going to keep up with modern day needs. UW had the perfect combination of everything I was looking for in a dual degree. The La Follette School of Public Affairs here is just incredible.

“Finally, the Wisconsin Idea, the idea that education should improve people’s lives beyond the university, really resonated with me. I was deeply impressed by an education that embodied that idea; in fact, it was the whole reason I was coming to law school.”

How are you working to make a difference for the LGBTQ community at UW Law?
“I am part of Q-Law, an organization dedicated to supporting LGBTQ students and legal professionals. I’ve worked hard, along with the rest of the Q-Law board, to make Q-Law a more active and robust presence for queer law students. When I came to UW last year, there were five or six people in the room for Q-Law meetings. Part of that is just the nature of law school. People have their minds on grades and classes. But the other part of it is on the organization to cultivate our presence and be available to our community. I think we did a good job of that. This year there were about 70 people at our first meeting.

“Also, as a queer person, I know it’s important to advocate for the larger queer community. That goes hand-in-hand with the Wisconsin Idea. So we’ve pushed to make UW Law more inclusive for trans and nonbinary students by changing signs on restroom stalls to make them more inclusive, for example, and by creating an option on student profiles so people can select their preferred pronouns.”

You’ve played a large role in Q-Law events and programming, too. Tell us what you’ve been up to.
“I’ve mainly worked on two big projects. The first is a mentorship program I developed with Nina Neff, the president of Q-Law. Only two percent of practicing attorneys openly identify as LGBTQ. It’s really hard to find role models in a field where networking is essential. Our new mentoring program connects LGBTQ law students with their lawyer counterparts so we can help our community begin to build that network.

“Second, we wanted to end the semester on a hopeful note, so that’s where our Trans Rights Law Panel came in. One of the four local activists we invited to speak discussed her federal lawsuit against the state of Wisconsin over an exclusion in the state employees’ medical insurance. She and another plaintiff were denied coverage for any medical procedure or evaluation related to gender modification or the transitioning process. In his recent very clear, strongly worded decision, Judge William Conley ruled that denying that care was in violation of the Affordable Care Act and Title 7. We organized the panel to share this positive development with trans law students, and with the larger queer community in Madison.”

You mentioned the challenge of finding LGBTQ attorneys to serve as mentors. What other obstacles are young LGBTQ lawyers facing?
“Here’s a recent example. When a representative from the army came to UW Law to recruit for JAG last semester, the military straight-out told students they wouldn’t be recruiting gender nonconforming or trans people. Of course, as a public institution, UW has to allow military recruiting. But there was this weird dynamic where we had a group of students who weren’t allowed to apply for those positions or even approach the table. This discriminatory policy is especially painful to our community when you consider the fact that trans people serve in the military at rates almost twice as high as the general population.

“In response, Q-Law organized an alternative event for queer students to be held at the same time as the recruitment. We also arranged a meeting with the recruiter, who was receptive to what we had to say even though there wasn’t much any of us could do to change the situation. At the end of the day, the military is going to miss out on some damn good lawyers.”

How about the Law School and the larger university? What could the institution do better?
“The university has been responsive to the things we’ve asked for, but at some point, it becomes a lot to have to ask. Politically, this has been a really tense time for the LGBTQ community. People just need a little extra reassurance that everything’s going to be okay.

“Visibility is key. I’d like future queer students — and queer law students in particular — to feel welcomed at the UW. I would like to think that it’s on the larger system to take steps to say, you know, these are people that we value, that we see you, and there’s a space for you here. For as much as the administration has been open to us, if they wanted to do more, that would be it.”

What does receiving the Stearns-Shaw scholarship mean to you?
“I’m fortunate to work at the La Follette School as a program assistant for Professor Jason Fletcher, who studies laws surrounding genetic discrimination. But I’ve often had to work while pursuing my legal education to make ends meet. For example, this summer I worked mornings at a bakery, afternoons in my unpaid internship, then I would bartend until two in the morning, and start all over again the next day. It’s really, really nice to have the financial burden of law school lessened. I’m incredibly thankful to Mr. Stearns for recognizing LGBTQ students who are putting in effort to make UW a more LGBTQ-friendly institution, as well as his commitment to our community.”

Moving forward, how are you hoping to use your law degree and your master’s in public affairs?
“I’m interested in the ways law influences the actual physical space that people are allowed to access. Housing discrimination and homelessness are LGBTQ policy issues that don’t receive much attention; a lot of housing initiatives leave out the LQBTQ community, especially trans folks. I would like to be involved in the process of planning for zoning laws with a policy making organization like the Department of Housing and Urban Development or the Office of Fair Housing.”

This article appears in the categories: Features, Students