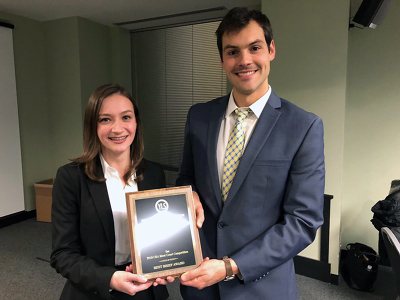 Bella Sobah, a third-year UW Law student, served as Drozd and Longley's coach. "Michael and Breana put a tremendous amount of effort into writing their brief and practicing their oral argument—lots of late nights, back-and-forth discussions about the best way to argue a point, and sticking to a pretty tight schedule. They incorporated all the advice from myself and the Moot Court board, making sure every practice was better than the last," Sobah says.

UW Law's Moot Court program prepares teams of two to four law students to compete in national competitions on a variety of subjects. Competitors, also known as “mooters,” write briefs and prepare oral arguments as if they were appearing before an appellate court.

For the Chicago competition, Drozd and Longley went up against approximately 30 other teams of law students representing schools from around the country. The competition, which took place in November, gave law students the opportunity to hone their research, writing and oral advocacy skills. Chicago bar members served as volunteer brief graders and oral argument judges to give participants a real taste of courtroom practice.

Ultimately, says Sobah, "I think the reason this team succeeded is that they cared a lot about doing well and making the UW Law School community proud."

This article appears in the categories: Students