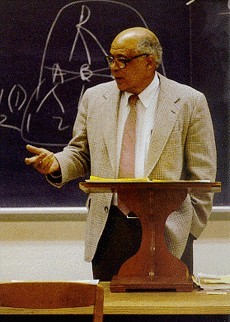 James E. Jones, Jr. has been a Professor of Law and Industrial Relations at the University of Wisconsin since 1969.

Born June 4, 1924 in Little Rock, Arkansas, he received a B.A., Magna Cum Laude, from Lincoln University (Missouri) in 1950; an M.A. in Industrial Relations from the University of Illinois in 1951; and a J.D. from the University of Wisconsin Law School in 1956. From 1951 to 1953 he served as an Industrial Relations Analyst for the U.S. Wage Stabilization Board. Joining the U.S. Department of Labor upon graduation from law school as a legislative attorney, he progressed to Counsel for Labor Relations, Director of the Office of Labor Management Policy Development, and was Associate Solicitor, Division of Labor Relations and Civil Rights in the Office of the Solicitor of Labor when he was persuaded to pursue a career in teaching.

Professor Jones has written widely on labor law and equal employment and affirmative action. He has been an Associate of the Institute for Research on Poverty and was the Director of the Center for Equal Employment and Affirmative Action of the Industrial Relations Research Institute from 1974 to 1993. From 1971 to 1973 he was the Director of the Industrial Relations Research Institute. He was a John Bascom Professor from 1983-1991, when he became the Nathan P. Feinsinger Professor of Labor Law. He was the 1991 recipient of the UW Hilldale Award as the outstanding professor in the Social Science Division and the 1995 recipient of the Wisconsin Law Alumni Association Distinguished Service Award. In 1996, he was named a Distinguished Alumnus by the University of Illinois Institute of Labor and Industrial Relations.

A member of the Labor Law Group since 1970, he served as chair of the Editorial Policy Committee (the Editor-in-Chief and Chief Executive Officer) from 1978-1982, during which time the Group published six books on labor law. Race in America, co-edited with UW Professor H. Hill, was named an outstanding book for 1995 by the Gustavus Myers Center for the Study of Human Rights in North America. He originated the William H. Hastie Teaching Fellowship program at Wisconsin Law School in 1973. Professor Jones was named 1998 Teacher of the Year by the Society of American Law Teachers. In 1999, he was inducted into the National Bar Association Hall of Fame.

A firm believer in the Wisconsin Idea--the boundaries of the university are the boundaries of the state--Professor Jones was appointed by the President of the United States to the Federal Service Impasses Panel (1978-1982); by the Governor of the State of Wisconsin to the Manpower Planning Council (1971-1976); and the Wisconsin Task Force on Comparable Worth (1984-1986); and by the Mayor of the City of Madison to the Police and Fire Commission (1973-1977 and 1994-1995). He served several three year terms in the University Senate and on the Athletic Board from 1972-1989. He has been a member of the United Auto Workers Board of Public Review since 1970.

Professor Jones retired from teaching in June of 1993. As Professor Emeritus, he continued to teach labor law and labor arbitration on a part-time basis until 1997. He continues labor arbitration, other dispute resolution, and consulting and lecturing on EEO/AA issues, as well as research and writing.