The University of Wisconsin Law School Moot Court Board is pleased to announce that it will host its annual Evan A. Evans Constitutional Law Moot Court Competition from Friday, February 17, 2023 through Sunday, February 19, 2023.

The competition is open to all law schools accredited by the American Bar Association.

During the first two preliminary rounds, each team will argue on-brief once and off-brief once. Then, the competition director will randomly assign teams to argue either on-brief or off-brief for future rounds.

Competition judge panels will be composed of experienced trial attorneys and judges from various state and federal courts.

He maintained strong ties to the University of Wisconsin by serving as a trustee of the Wisconsin Alumni Research Foundation, as a president of the Alumni Association, and as a member of the Board of Visitors.

While on the bench, Judge Evans asked for and received a separation of the duties handled by the circuit and district court. This meant the district court would handle all of the trial work while the circuit court handled the growing number of appeals. Judge Evans’ request to physically separate the courts resulted in the construction of the United States Court of Appeals building at 1212 Lake  Shore Drive in Chicago.

The University of Wisconsin Law School Moot Court Board is pleased to honor the career of Judge Evans by inviting students to argue constitutional issues in hopes of living up to his high standard of appellate advocacy. 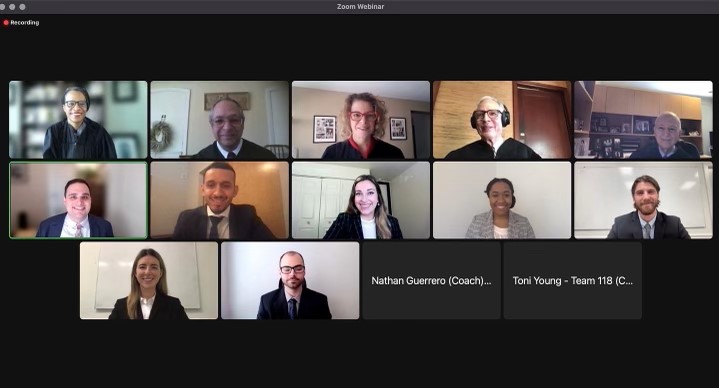 Screenshot of the 2022 Evans Competition Final Round

Pictured in the screenshot (left to right, top to bottom):

If you have any questions, please feel free to contact the Competition Vice Presidents by email at evanscompetition@gmail.com.