What is restorative justice?

Restorative justice seeks to examine the harmful impact of a crime and then determines what can be done to repair that harm while holding the person who caused it accountable for his or her actions. Accountability for the offender means accepting responsibility and acting to repair the harm done. Outcomes seek to both repair the harm and address the reasons for the offense, while reducing the likelihood of re-offense. Rather than focusing on the punishment meted out, restorative justice measures results by how successfully the harm is repaired.

Additionally, restorative justice seeks to include those most directly affected by a crime in the justice process, namely victims and survivors. Rather than a process focused on the offender, restorative justice focuses on those who have been harmed and the harms they have experienced. In the restorative justice process, victims are empowered to participate more fully than in the traditional system. Likewise, the community plays an important role in the restorative process by establishing standards of conduct, helping to hold an offender accountable, and providing support to the parties involved and opportunities to help repair the harm that has occurred. The opportunity to express the harm a victim has experienced, full participation in decision making, and support from the community all aid in the healing in the aftermath of a serious crime. 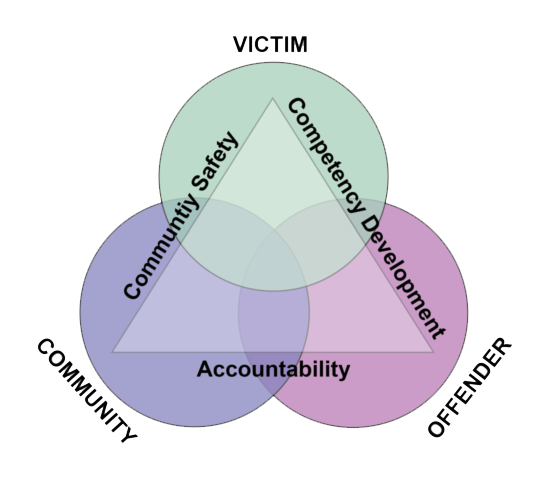